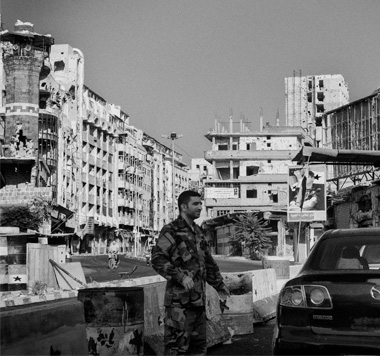 The Overseas Development Institute (ODI) inspires and informs policy and practice to reduce poverty, alleviate suffering and support the achievement of sustainable livelihoods globally through high-quality applied research. ODI’s Humanitarian Policy Group (HPG)  is currently completing its research programme on humanitarian access seen from the perspective of local organisations. The case study on Syria looks at how different local organisations address access challenges. The following is a summary of findings.

Access is a key challenge in delivering aid to the 13.5 million people in Syria who need it, for ‘local’ and ‘international’ actors alike. All aid agencies, whatever their provenance, face similar access challenges and address them in similar ways.

In Syria, humanitarian organisations face a situation where the intensity of combat and the lack of adherence to international humanitarian law (distinction and proportionality) make it a particularly challenging environment in which to operate. In addition, bureaucratic hurdles, counter-terrorism legislation and a fragmentation of conflict parties exacerbate an already difficult situation. The Syrian conflict is in its 7th year and its scale, intensity and duration have revealed the weaknesses of both the humanitarian and the political response.

Since the start of the conflict in Syria in 2011, a diverse set of local organisations has emerged, ranging in size from a handful of volunteers on a small budget to multi-million-dollar operations with hundreds of staff and volunteers. These groups have almost inadvertently filled the gap left by the limited international presence, providing both assistance and protection. Their comparative advantage lies in their local connections, networks and contextual knowledge. This allows them to negotiate with various armed groups, local councils and communities in need. Those negotiations are particularly challenging in the Syria context given the fragmentation of armed actors. One area might be controlled by an armed group sympathetic to the plight of civilians allowing aid to reach them while another area might be in the hands of another group that might be less receptive to the argument that civilians need to receive assistance. Each time, the messaging of aid agencies needs to be adapted accordingly.

Apart from critical local networks, the strength of local organisations also often lies in their structure and organisational set-up: many of them are small, agile and flexible. They are embedded in, indeed often come from the very communities they aim to assist. This allows them to identify needs of affected communities and respond to them more rapidly than might be the case for larger organisations with little or no presence in areas directly affected by conflict.

That said, HPG’s research has also shown that being local does not automatically translate into unhindered access. While personal networks help in establishing the necessary trust and acceptance to negotiate access in the first place, such acceptance is not limitless. Sustained access must be earned through effective, reliable, timely and relevant humanitarian assistance that demonstrates tangible benefits. Also, while being small and agile has tremendous advantage, it also means that providing assistance at scale may not be possible. With time – in particular when a conflict lasts longer than expected - local organisations increase in size, move from being volunteer based to hiring staff and dealing with bigger budgets. While this allows them to scale up, it also means that with an increased formalisation and institutionalisation there is often a change in identity. In the case of Syria there is a sense that organisations based in Turkey where they can more easily engage with international agencies and attend coordination meetings on the other hand compromise on their ability to be close to populations.

Eva Svoboda is a Senior Research Fellow at the Humanitarian Policy Group (HPG) at the Overseas Development Institute (ODI). The views expressed in this paper are those of the author and do not necessarily reflect the views of the United Nations Secretariat.