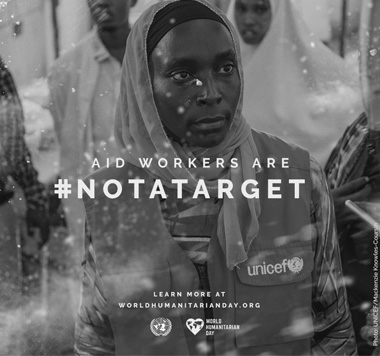 World Humanitarian Day is marked every year on 19 August to honour and remember aid workers who have been killed on the front lines of crises.

This year, humanitarian partners came together to reaffirm that civilians trapped in conflict are #NotATarget. Through events held around the world, an innovative online campaign and a global petition, the humanitarian community advocated for the most vulnerable people in war zones and demanded that world leaders do everything in their power to protect civilians.

The United Nations and partners launched a petition demanding that global leaders do more to ensure the rules of war are upheld and civilians are protected in armed conflicts. The petition, which can be signed at www.worldhumanitarianday.org, will be presented to the world’s leaders when they gather in New York for the 72nd General Assembly, which opens on 12 September this year.

The #NotATarget campaign builds on the Secretary-General’s May 2017 report to the Security Council on the Protection of Civilians in which he laid out a “path to protection” based on enhanced respect for international humanitarian and human rights law, and protection of civilians, humanitarian and medical workers, as well as civilian infrastructure. It also builds on Core Responsibility 2 of the Agenda for Humanity, in particular the call through transformation 2E to launch a global campaign to stand up for the rules of war.

In 2008, the UN General Assembly designated 19 August as World Humanitarian Day in 2008 to raise awareness about humanitarian assistance worldwide and the people who risk their lives to provide it. The date is the anniversary of the 2003 bombing of the United Nations headquarters in Baghdad.