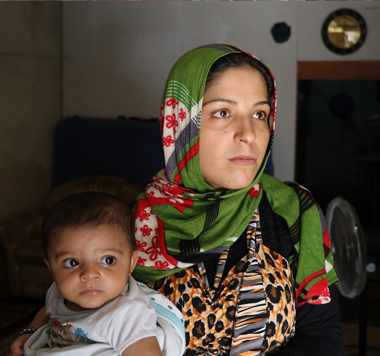 What can we learn from refugees’ own perspectives and agency

Displacement is protracted, yet there is little support for livelihoods and self-reliance

Refugees we interviewed had a wide array of livelihoods objectives but strikingly similar priorities: safety, family unity, finding ways to sustain themselves and their families, and ensuring their children would have a better future. They adopted a range of strategies to sustain themselves over the course of their displacement, including working long hours in low-status and low paying jobs, working illegally and informally, using their networks to find and increase the quality of their jobs, partnering with locals to start businesses, and maximising access to formal humanitarian aid. To sustain themselves and reach their objectives, refugees relied on a wide range of support and ad hoc help from family, friends, neighbours, employers, and others in the host community, while also benefitting from more formal support from state or aid actors.

Yet, for most refugees, such formal and informal support did not result in sustainable livelihoods: in Cameroon, because refugees had limited economic opportunities in an environment suffering chronic development challenges; in Turkey, because refugees could not freely apply their skills and utilise their expertise; in Jordan, because refugees were penalised for working illegally, and felt dependent on limited assistance; and in Malaysia, because the status of refugees is not recognised by the state, and most work illegally and are at risk of detention. Where refugees felt they had succeeded in their livelihoods plans, this was a result of personal attributes and hard work rather than good programming by aid agencies. In the four countries, refugees struggled to make ends meet and did not find support from aid agencies that failed to implement self-reliance and livelihoods programmes at the onset of their displacement. This is changing. Recent shifts in the Syria refugee response have shown how more coherent and strategic multi-level interventions can better support refugees.

Integrating refugees’ perspectives continues to be a challenge

And yet even in responding to the Syrian refugee crisis, integrating the perspective of refugees to inform policy change continued to be a problem. The fast-changing nature of policies pertaining to refugees in host countries – even when policy changes stood to benefit refugees – reinforced feelings of uncertainty, and undermined confidence that policies would not change again for the worse. Policy shifts on work permits in Jordan and Turkey were initially perceived negatively by refugees, who felt that these schemes were distant and out of touch with their realities, particularly for those working in sectors where informal labour is the norm. The perspectives of refugees continue to be integrated in an ad hoc manner, post-policy change rather than used as a basis for programmes and advocacy.

Way forward: opportunities to better support the livelihoods of refugees in protracted displacement